We're on the final stretch to making it through the Bible. If you make it through the whole Bible, you're joining the 11% of Americans who have completed the venture. What I've discovered through this journey is that finishing really is just beginning. We've breezed through this year and gained a bit of a foundation for understanding, but it will take a lifetime to get to know this book.

If you've been reading through *most of the Bible in a year with us, you know that the church is learning more about what it means to be a Christ follower. This month the letters to believers continue to come in as believers look for help in understanding how this story is going to end. It is a beautiful ending. It inspires us to live life in light of eternity. 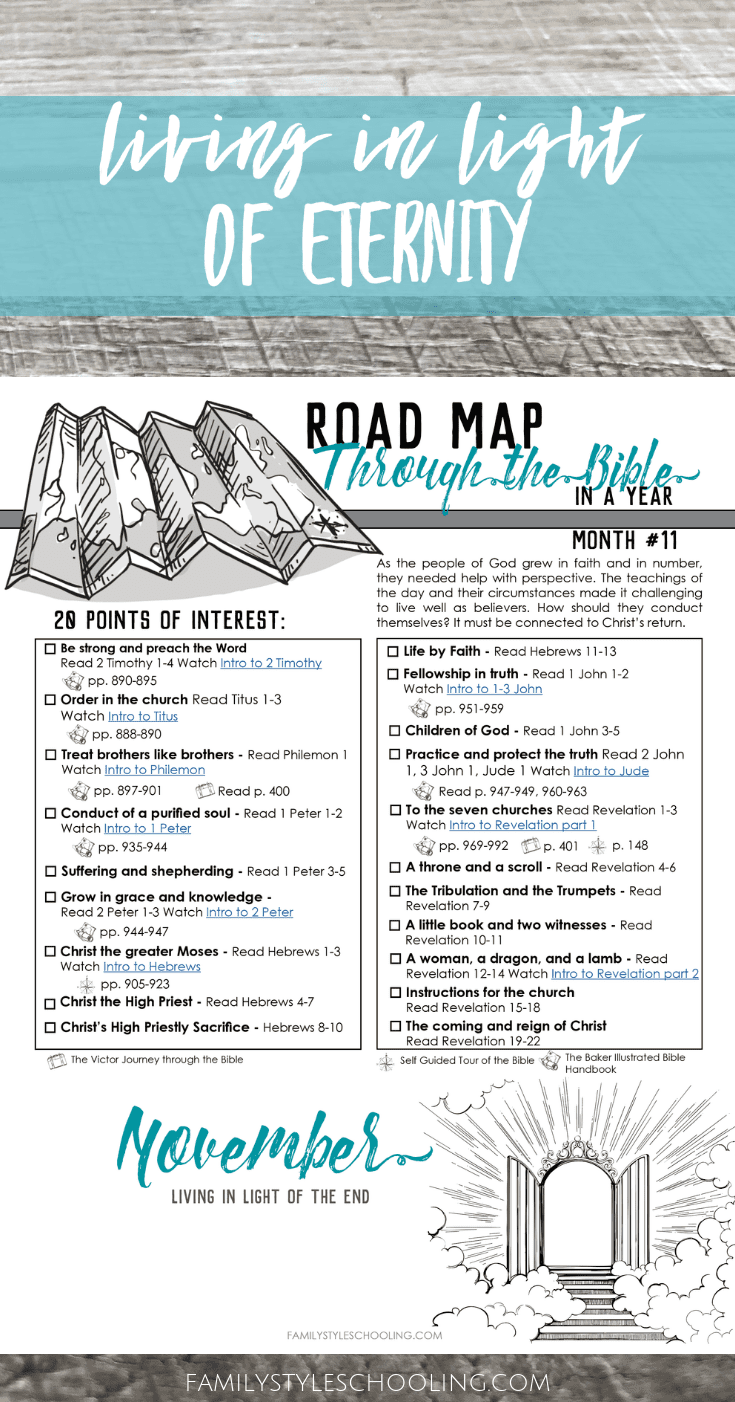 If you're just here to grab the next month's road map, you can download it here:

On our last road trip, one of my favorite stops was the Billy Graham Library. My mom has really got us in to the Presidential Libraries, and even though this one isn't included in her Presidential Library passport, his council of every president since Truman made his museum that much more fascinating for us.

If ever there was a man who lived with eternity in mind, it was Billy Graham. His singular focus on sharing the truth of Christ with everyone around was inspiring. He wasn't the greatest scholar, but he had great faith in his extraordinary God.

Living in Light of Eternity

As we drove to the Billy Graham Library, we listened to Geoff and Janet Benge's retelling of his life story. This was a great way to prepare for seeing the exhibit from his life.

Growing up on a dairy farm, Billy Graham was inspired by several revival meetings he attended. His simple faith and bold ideas for sharing the gospel impacted the world for over 70 years of ministry.

What amazes me is his singular focus throughout his life. When he was young, he worked hard to practice his preaching skills. He'd observe men who he admired preach and then take the skills he found especially effective and apply them to his own teaching. The result of his efforts paid off as thousands came to hear him speak and were moved by his simple message.

Right after we went to the Billy Graham Library, we headed to the Ark Encounter in Kentucky. Noah struck me as a man with a similar simplicity that had a much different outcome from the diligence with which he applied himself to God's calling. Noah built an amazing boat of salvation for his family and the animals, but some might wonder why he didn't bring anyone else on the boat with him. Was he just such a poor evangelist that he couldn't get anyone to believe him? The reality is that the faithfulness in which we serve God is not based on the results we achieve on our own. There will never be another Noah, thankfully because God has promised not to judge the world in the same way that he did in Noah's time. There will also never be another Billy Graham because the time for his type of ministry has passed. In each generation, God raises up new men and women that catch the vision for living lives with eternal perspectives.

You Don't Have to Be Extraordinary

My dad had this gift for evangelism, and while he didn't lead hundreds of thousands of people to the Lord like Billy Graham, he gave me a vision for what it looks like to live life in light of eternity. His goals in life were to be transparent about who he was apart from God and then share how God's extraordinary grace transformed his life into something incredible. You can read his story here.

This has always been such a comfort to me. To live in light of eternity means I can be ordinary and allow God to work in extraordinary ways throughout my life. As I cultivate the skills and abilities that he's given me, I just allow his name to be glorified more.

Want the Rest of the Plan?

Click on the links below to read more about our complete reading plan. Start wherever you'd like to jump in!

← Experiencing the Ark Encounter in Williamstown, KYBusiness 101 at World of Coke →