In May my son was wandering around in our backyard desiring to find a way to get his hands dirty in a good project. Little did he know what kind of trouble he would start! I grew up in the house my family lives in. When I was eight years old, my parents put in a pool. Those were the days. Since then, the backyard has been well loved (the nice way to say "a little run down"). Specifically, one corner of the yard has been completely unusable. We've tried to come up with ways to make it enjoyable, but nothing has worked...until now! With Andy's project inspiration, we dreamed up a design for him to build with his dad, and now we have an incredible way to take the school outside! 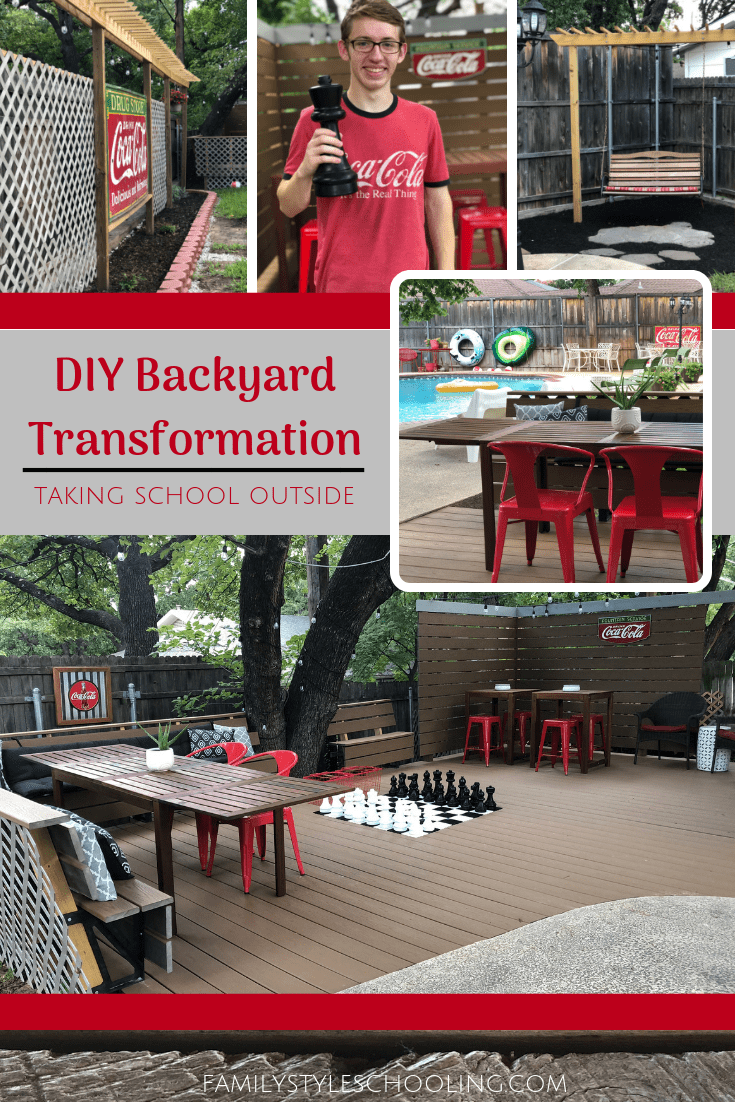 It All Started From a Game of Chess

Andy started with cleaning up some areas of the yard. A honey locust was taking over this back corner section, so he cut it down. Once the three-thorned monstrosity was out of the way, he started dreaming of ways we could use this area. His thoughts of the recreational nature generally revolve around chess. So this became the dream: how can we get a big chess game out in the back yard? With the slope in this area, we decided we'd need a deck to keep everything in place. That's how the idea for a deck came about. 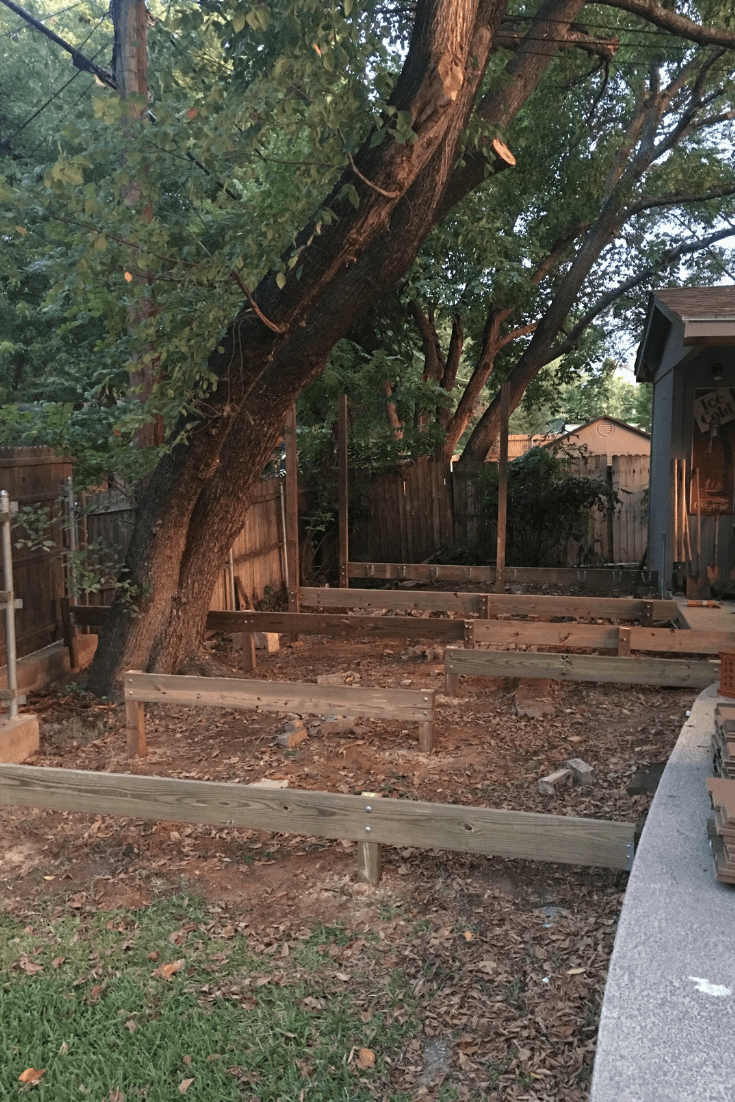 While we were on our trip to the beach, we took some tracing paper and measurements from this area in the yard. Everyone took turns dreaming up a version of what could fit in this space. This is where the true handiwork school began. There are so many times when we miss passing along the skills that we have to our children. My husband is a gifted woodworker, but Andy hasn't had much opportunity to join him in the shop. This project became a wood shop summer workshop or Handyman 101 for my son. 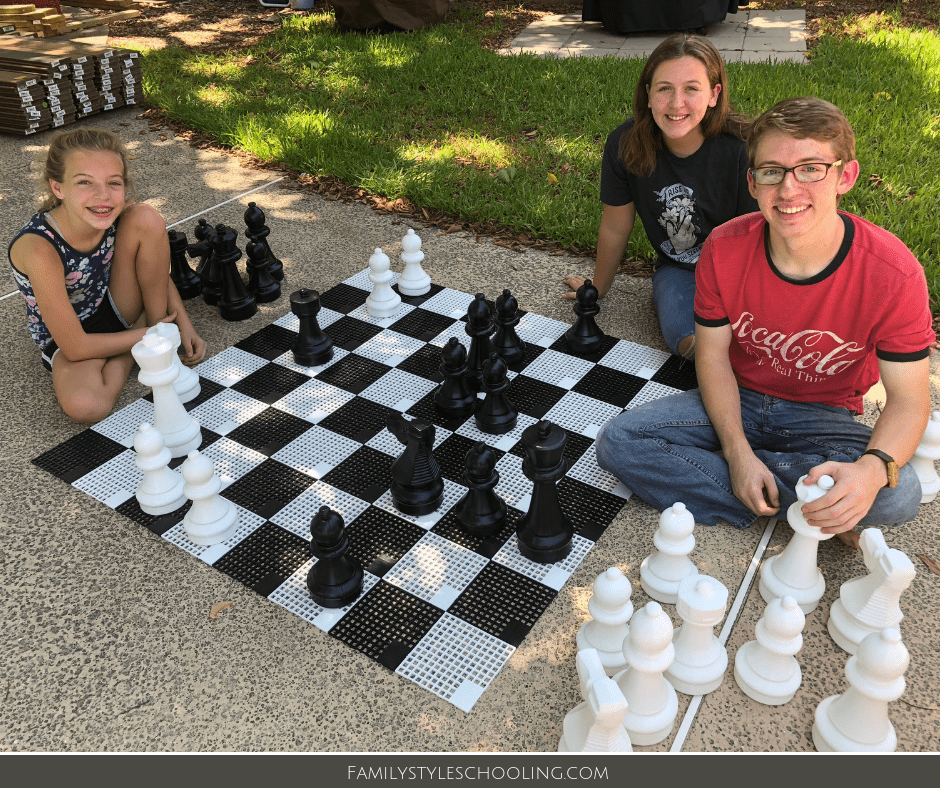 We found the perfect giant outdoor chess set and plastic board that would work perfectly on the deck. With the game in hand, it was time to build a deck! 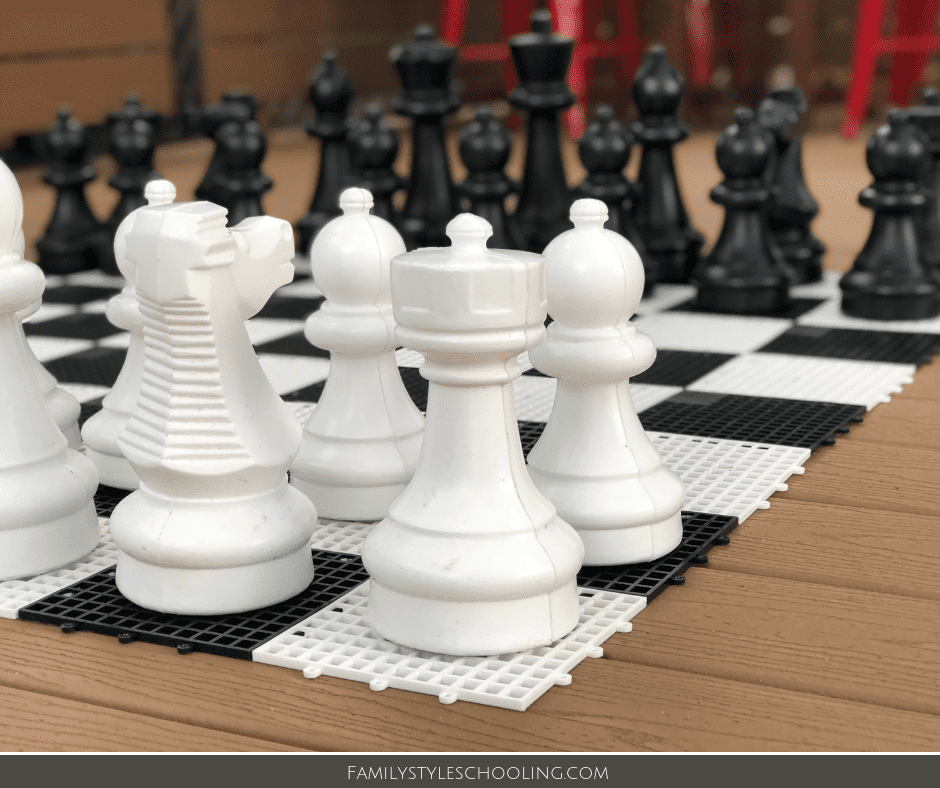 First of all, when we built our library addition last summer, the builders just dumped the bricks they removed behind my husband's shed. It was great for helping with the drainage of the water behind it, however it looked like a brick graveyard. A deck made for a great way to cover up the mess. 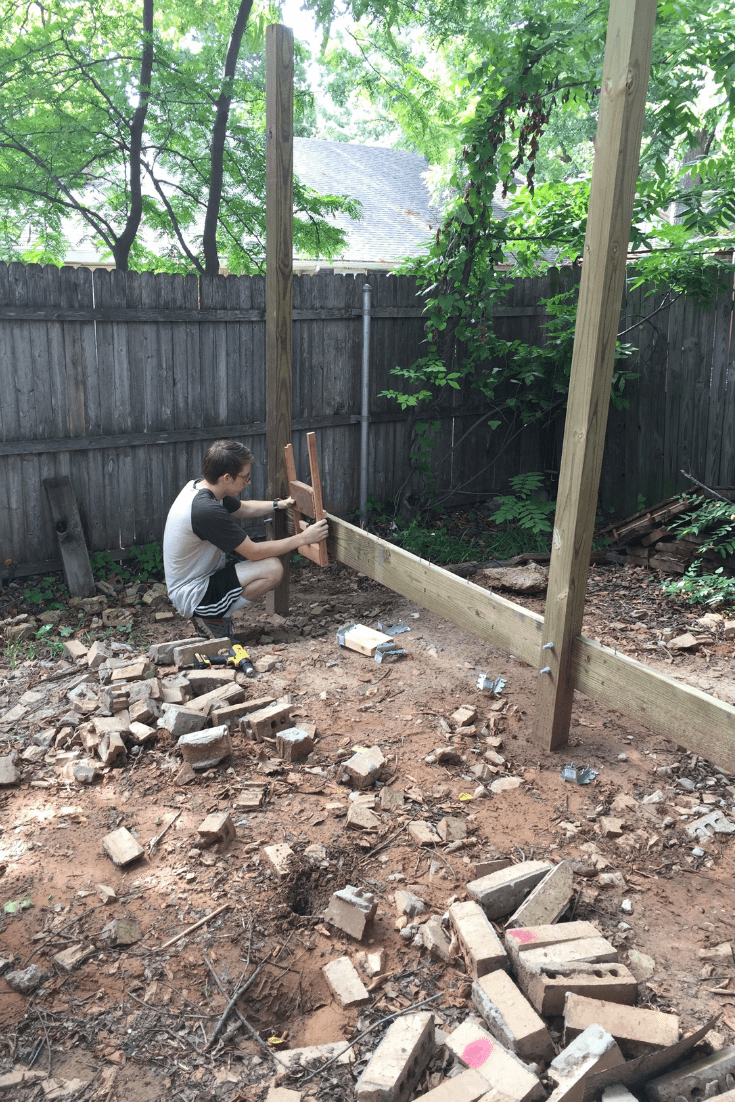 The structure for the deck provided an abundance of opportunities for learning. Every screw, every angle, and every cross brace became a chance to hone his woodworking skills. Of course in Texas, the heat is relentless. The week the boys tackled the deck, the temperature hung around 108°. Yikes! 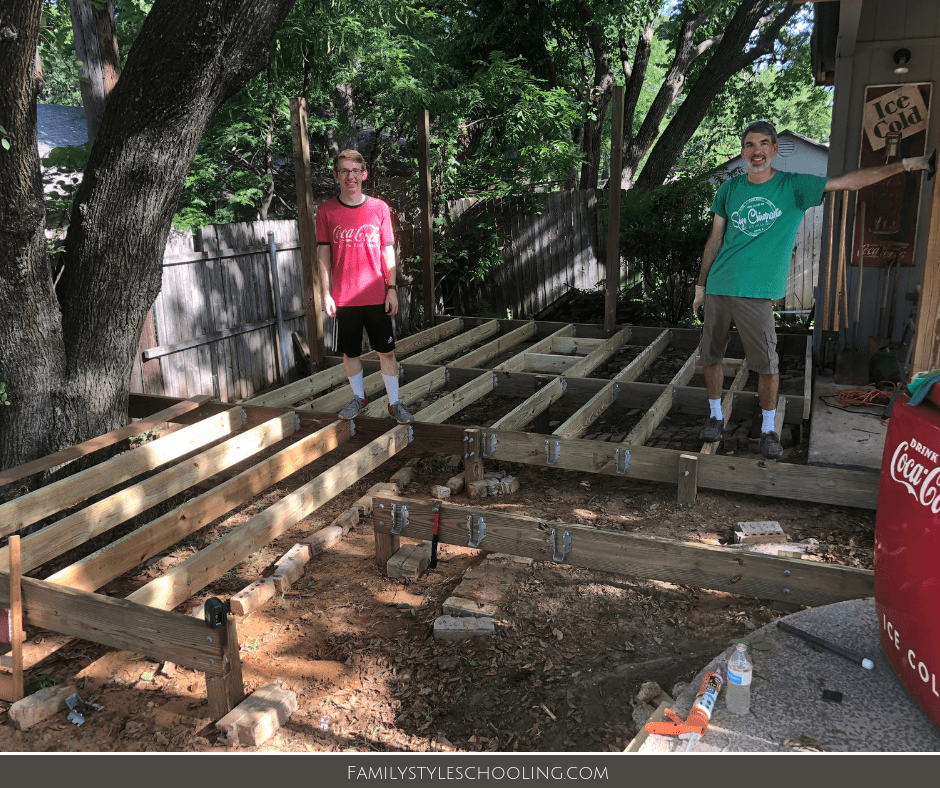 From Deck to Outdoor Living Space

Instead of putting a rail around the edge of the deck, Andy found these cool bench brackets that converted the edge of the deck into seating. Since they were using the composite decking, this part of the job actually ended up being harder than the decking! The upside though is that those boards aren't going anywhere. 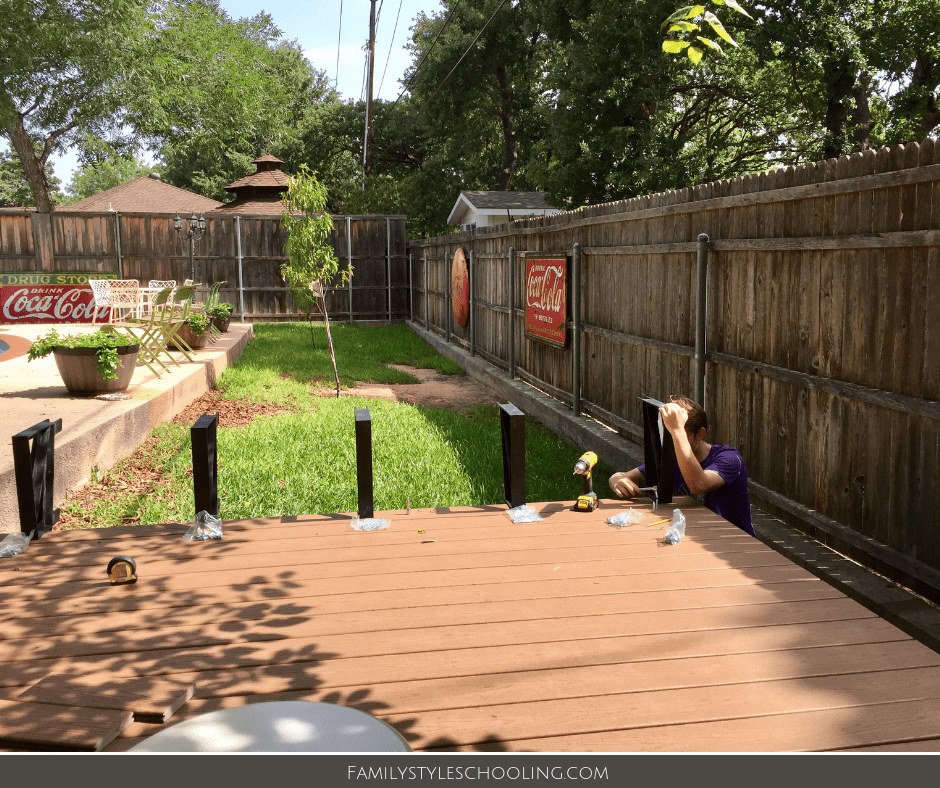 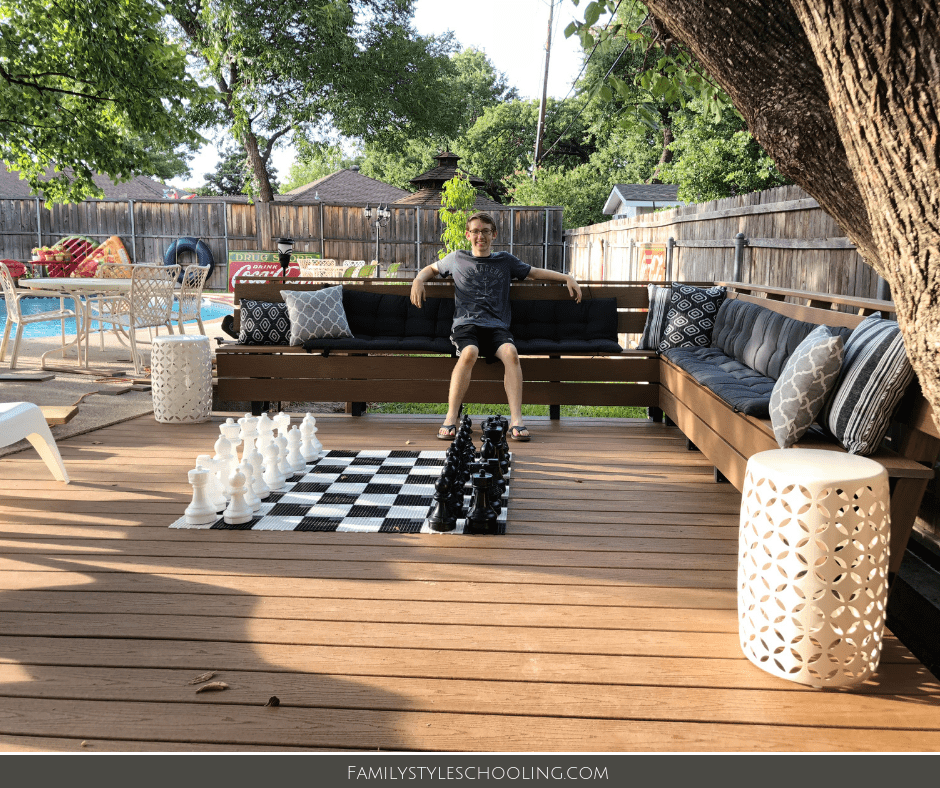 With a cute table from IKEA, this area of the deck transformed into an outdoor dining room, or a place to take our homeschool outside when the days get cooler. 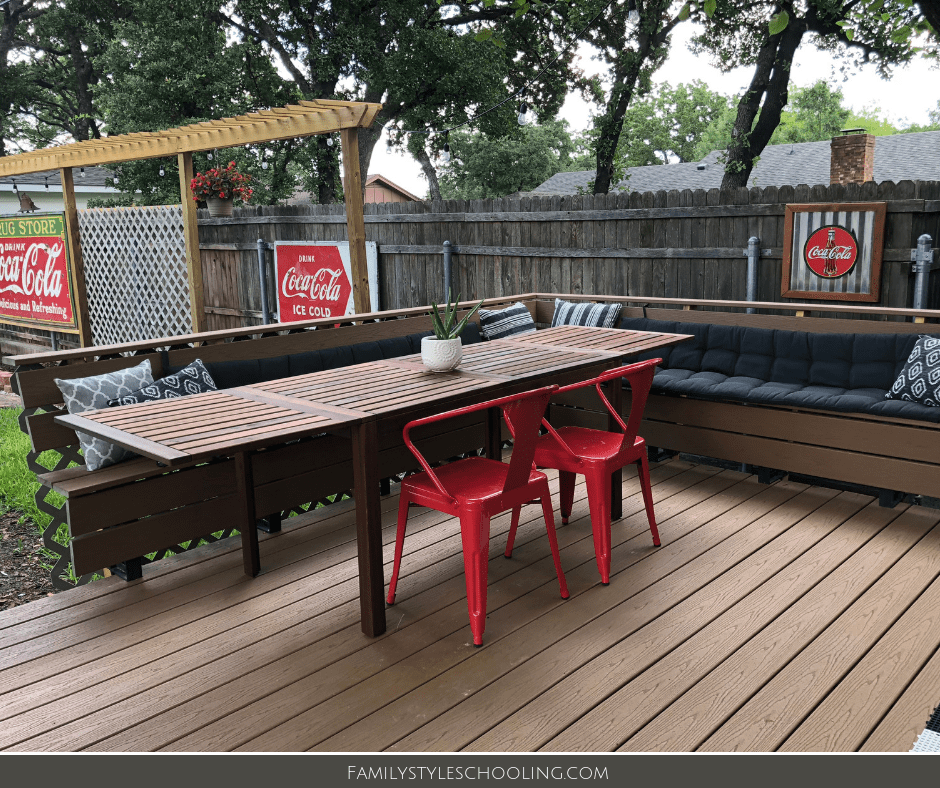 Since the deck connected to the existing shed, which used to act as a tool storage dumping ground, the boys cleaned it up and incorporated it into the space. As I was growing up, my dad and my sister collected Coke memorabilia. We've had it for years, but didn't have it all displayed. We pulled it out, cleaned it up, and set it out to enjoy! 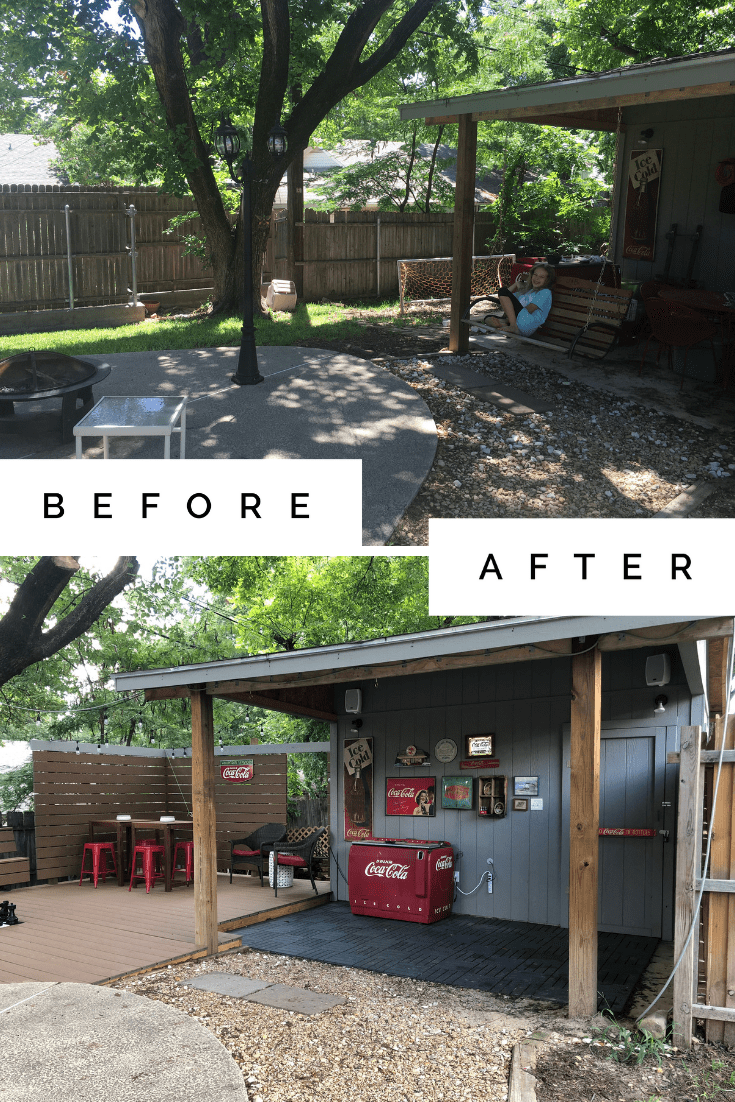 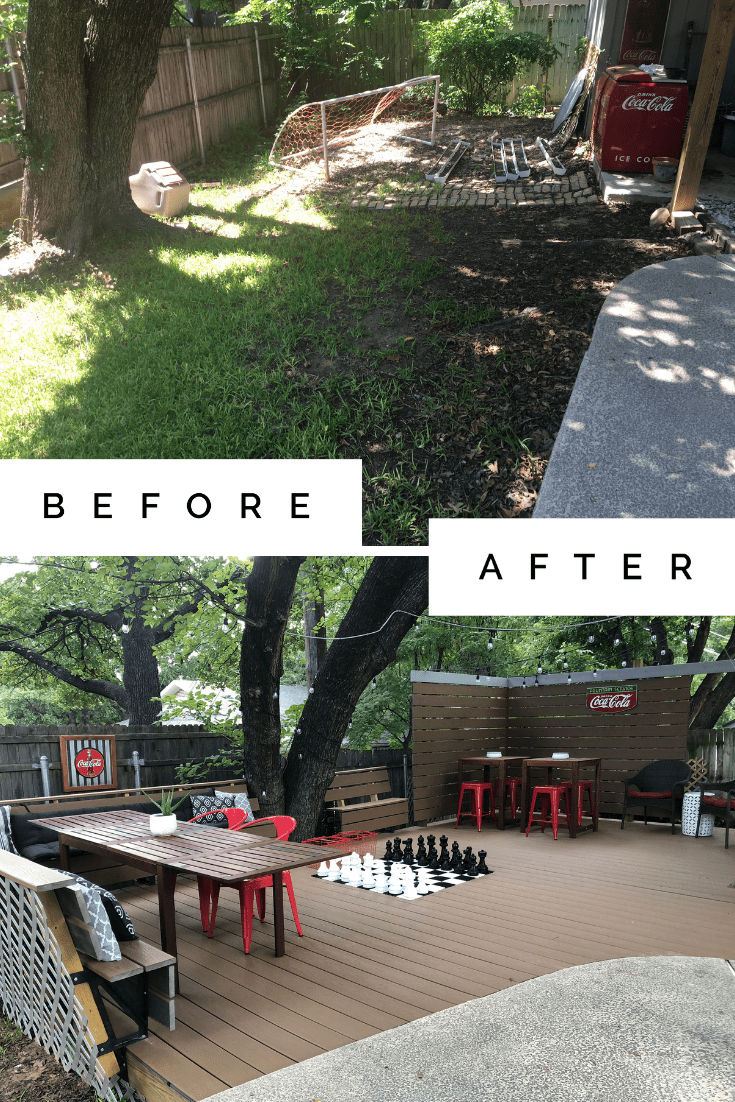 They added a privacy wall on the back corner of the deck so that our neighbors wouldn't feel like their backyard was invaded, but I love how it turned out. Some of our other deck furniture includes: 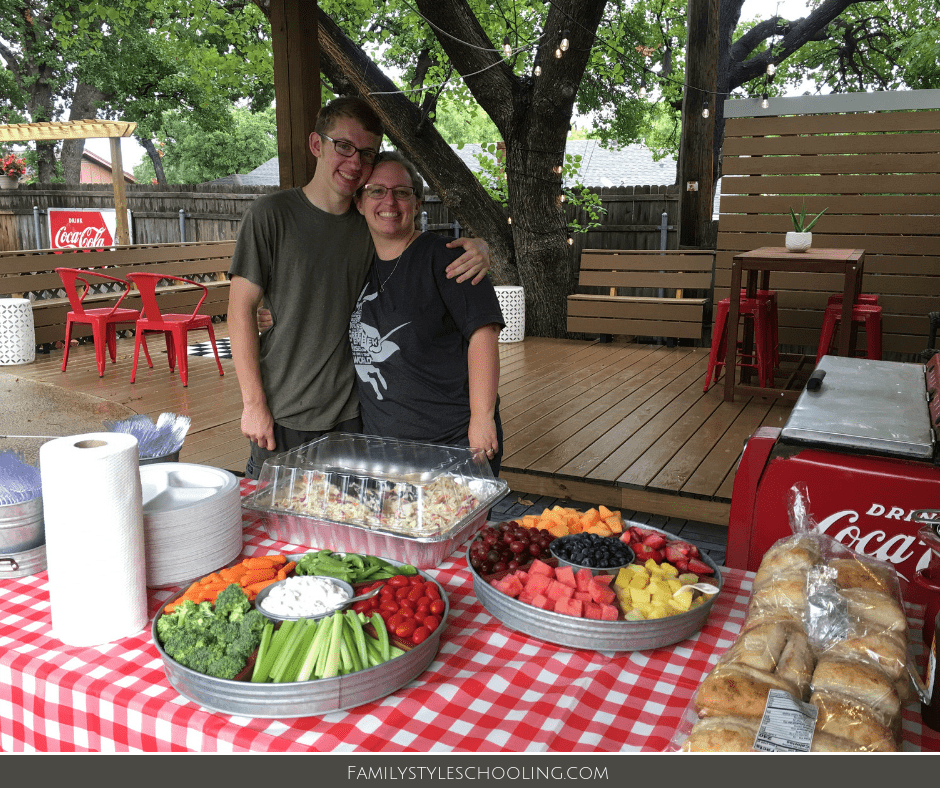 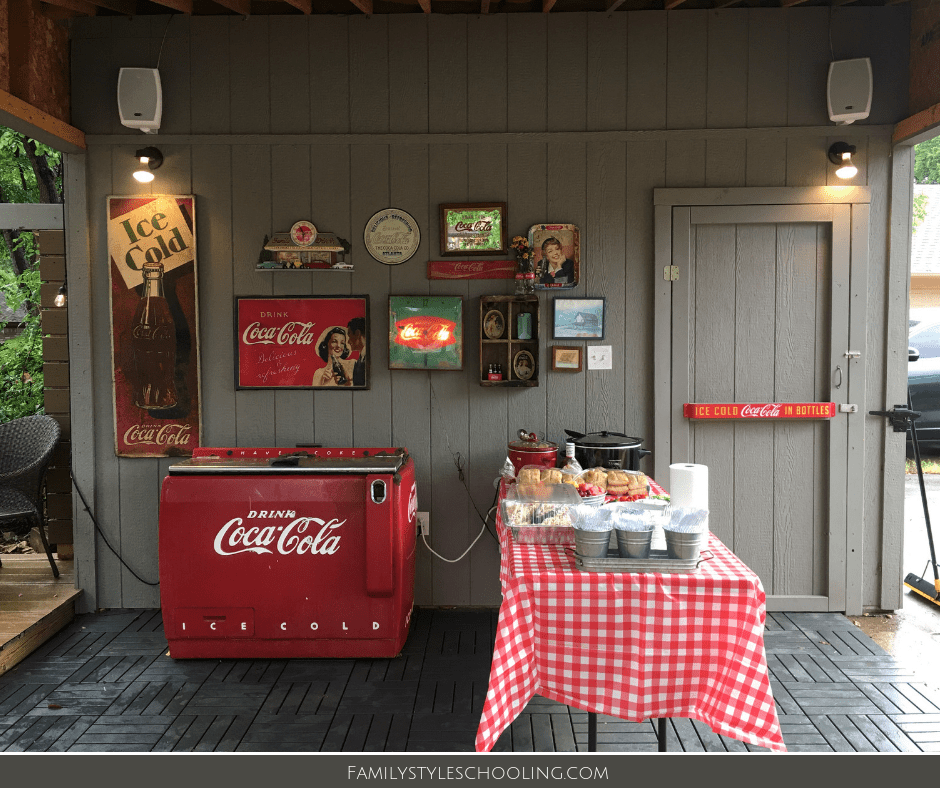 It also doubles as a great place to stage food for parties! We took all of the unworking insides out of the Coke cooler, and now we just fill it with ice to chill drinks for guests.

To finish out the deck space, we hung string lights to light it up at night. They are so beautiful and really light up the space well without being too bright. Andy won a fun little remote plug in gadget at his Grandma's this summer, so he used it to operate the lights. This way we can turn the lights on from inside before we head out.

They're Just Getting Started

After the success of the deck project, Andy decided he'd like a bit of earth to try his hand at growing things. He's spent quite a bit of time working in other peoples' yards, so he thought he'd like to do the same in ours. I approved of this idea. (At this point the rest of the family was starting to get worried at what might happen when Andy and I dreamed up a plan together!) 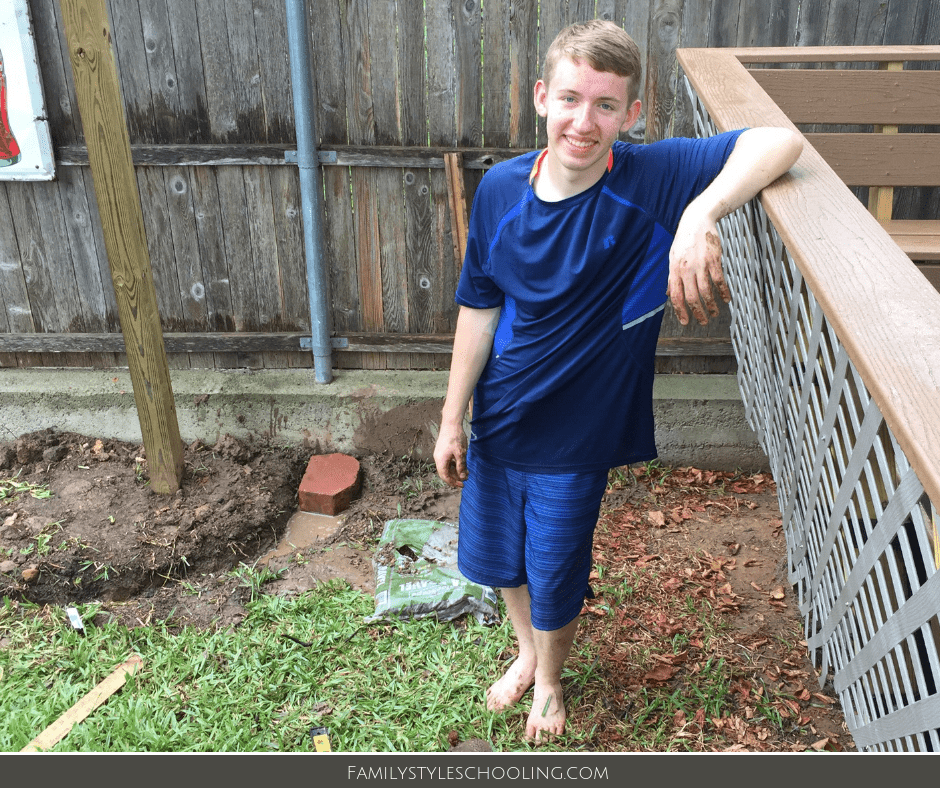 Of course, when they decided to move on to this project, the rains started to come...and continued to come. It became quite the muddy mess! 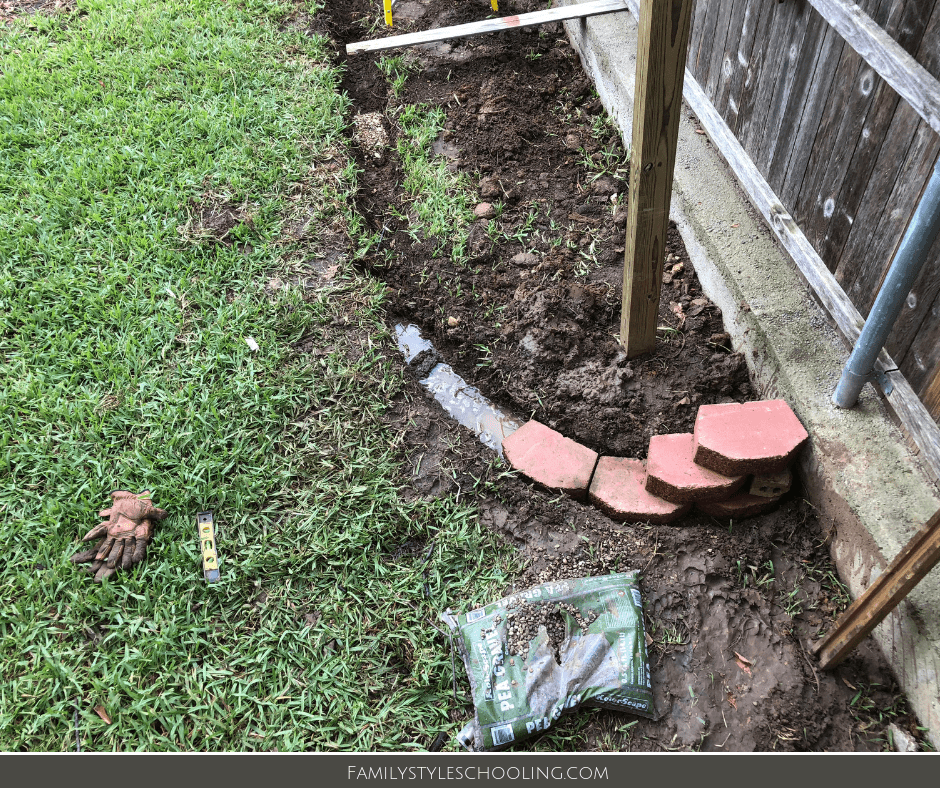 We were trying to get all of this done before Andy's 18th birthday party (I hadn't thrown him one since he was 9), so on the day of the big event, rain and all, they were finishing up the planter and laying the mulch! 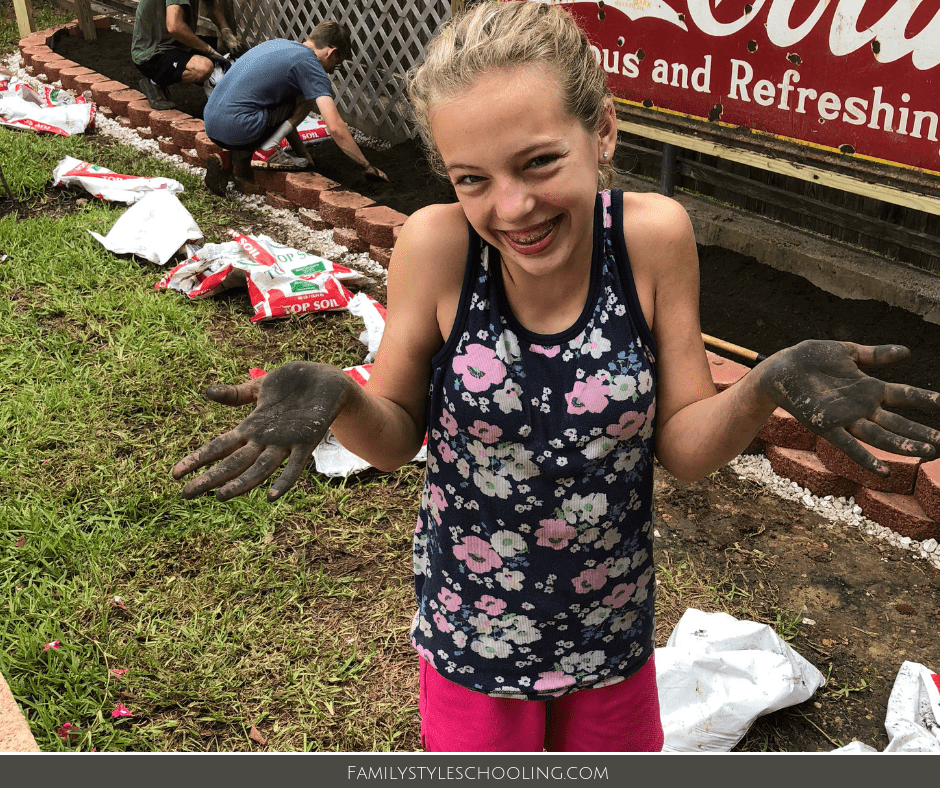 Thankfully the rain cleared up in time for the party, and the planter trellis/mini pergola turned out beautifully. Right now we've just planted a couple of sage bushes and a couple of nandinas. When the spring rolls around again, we'll plant something to climb up the lattice. 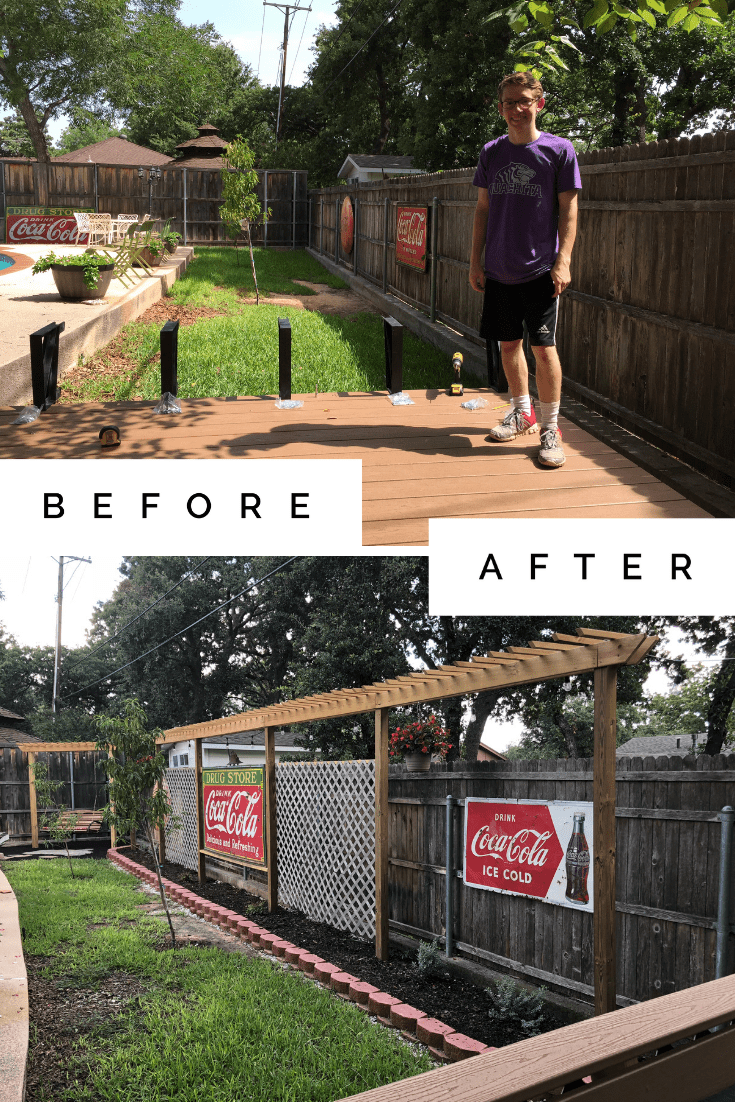 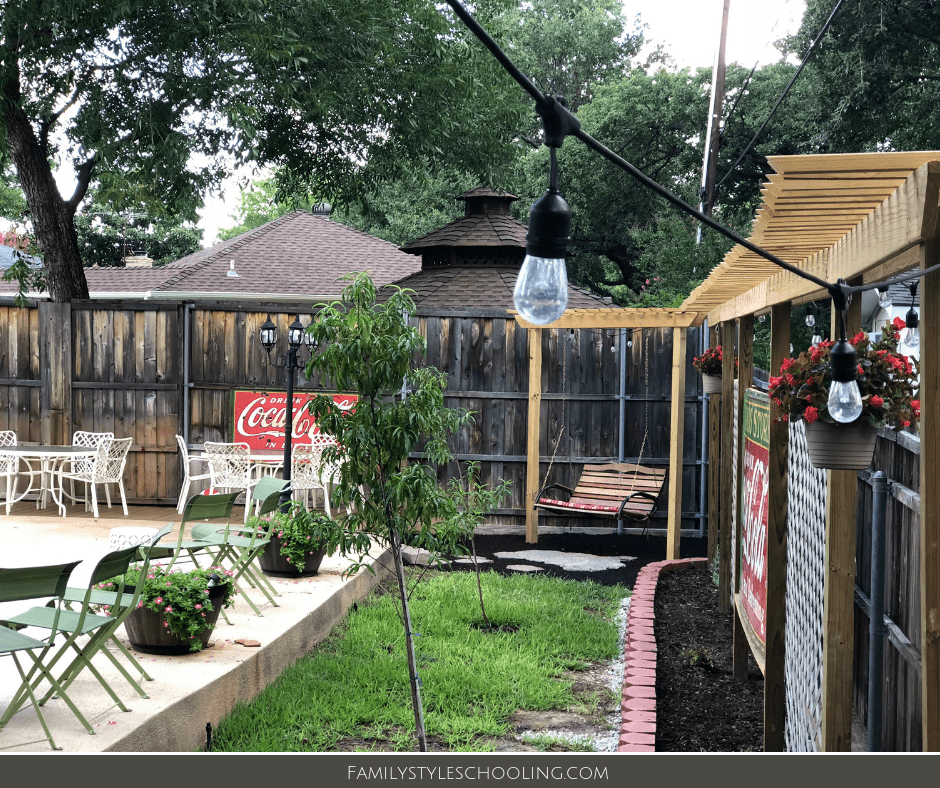 The swing that used to live under the shed also got a new home on the other side of the yard. I love reclaiming yard space that used to be unused space. 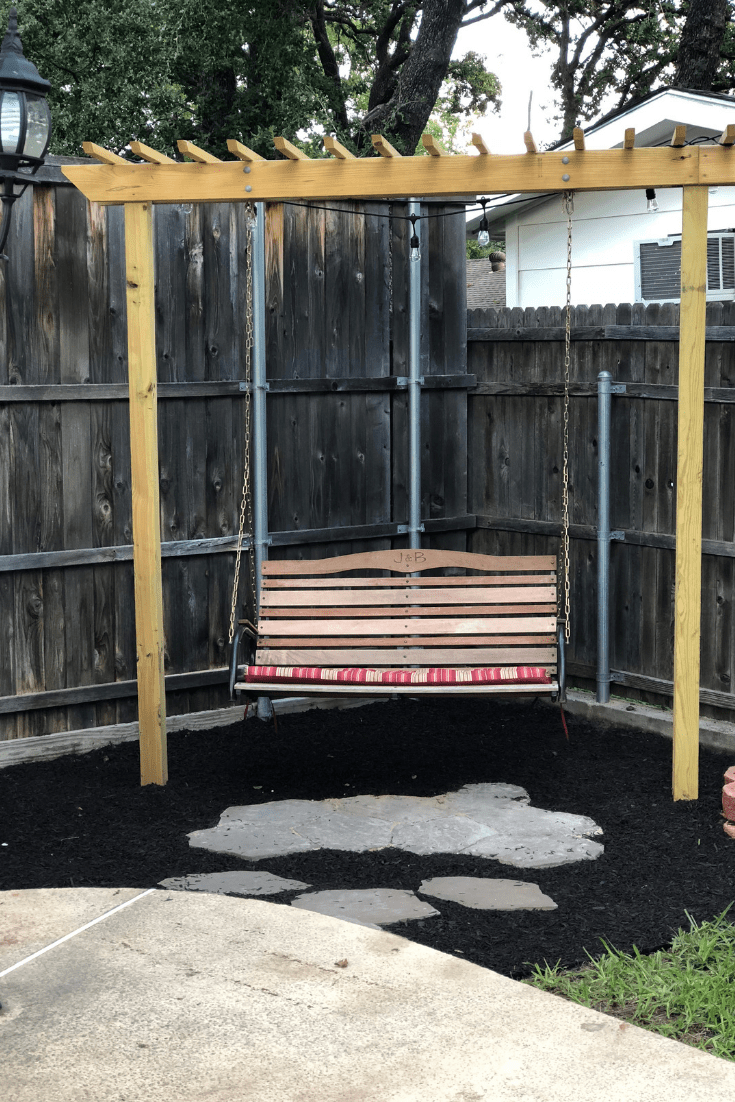 My husband got me this swing last summer and burned our initials on the back. It's pretty sweet.

What do you do with leftovers?

I am not a fan of throwing anything away. When I found the scraps of decking material the boys had leftover from the original project, my mind started playing around with different ways to use the leftovers. At first I thought they could make some benches, but that material is so heavy, they would be impossible to move. So I worked out the puzzle and they built a little extra deck on the other side of the yard to hold the tables that my parents bought when they put the pool in a million years ago. 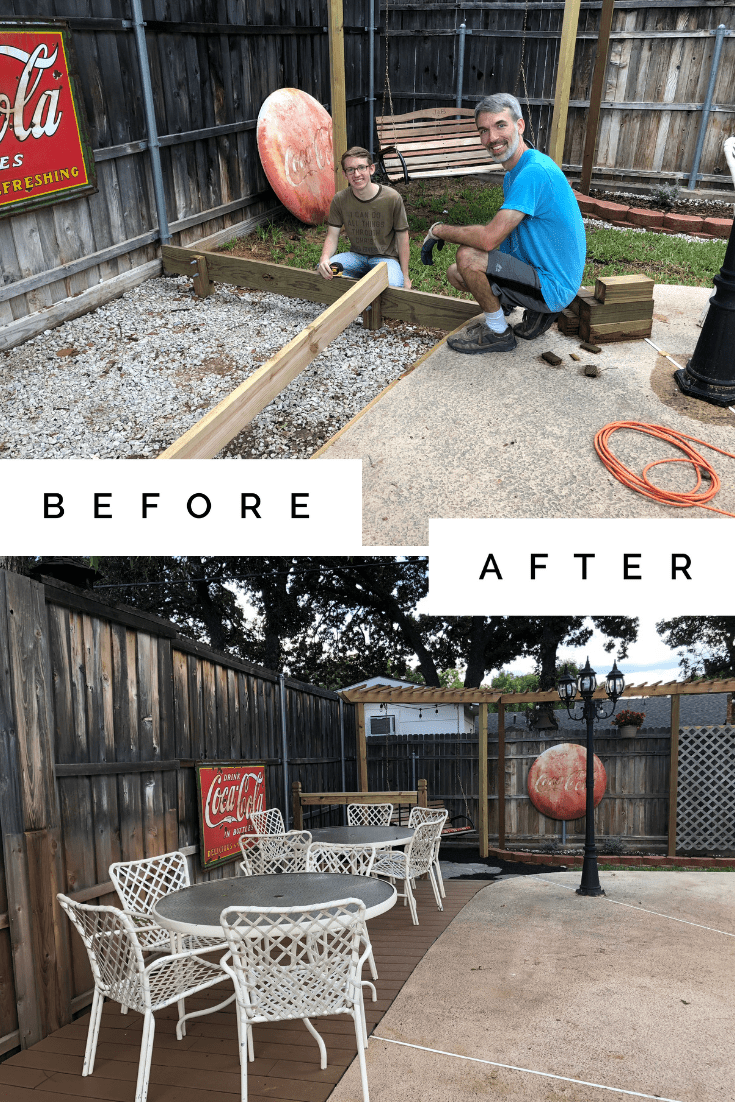 It really opens up the space and provides extra seating under the shade of the tree on the other side of the yard. To finish it off, they added a little rail, so that no teenagers would fall off the back! 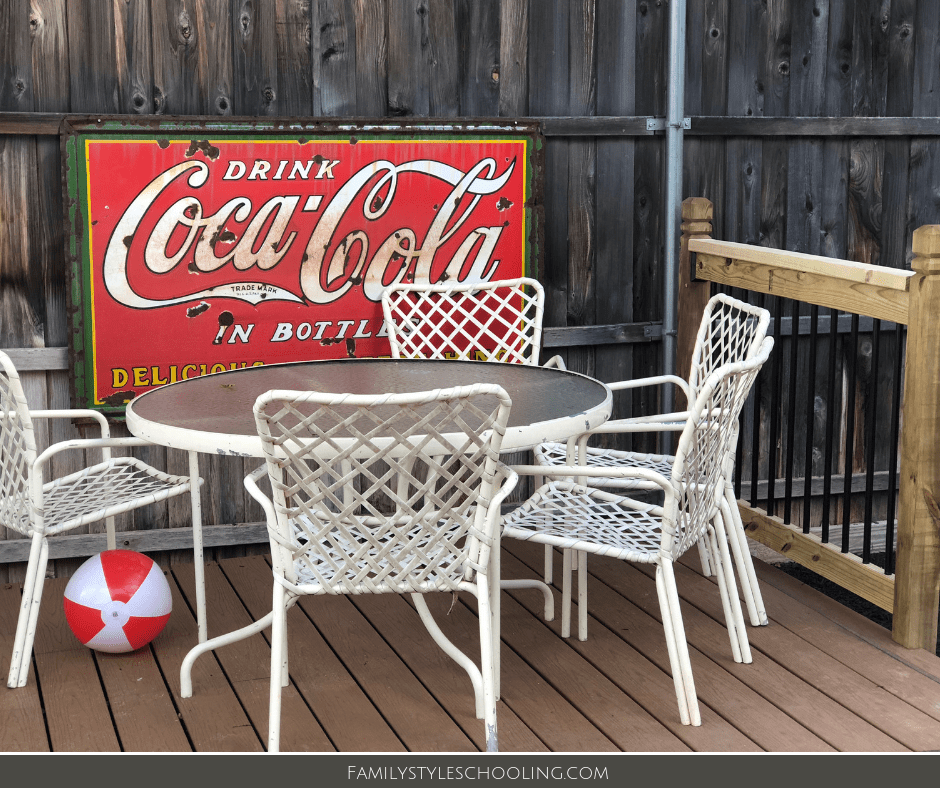 It was quite a project and incorporated so many learning possibilities for my son. The best part of the whole project was the time that my husband and son got to spend together. That relationship was strengthened by their time together. 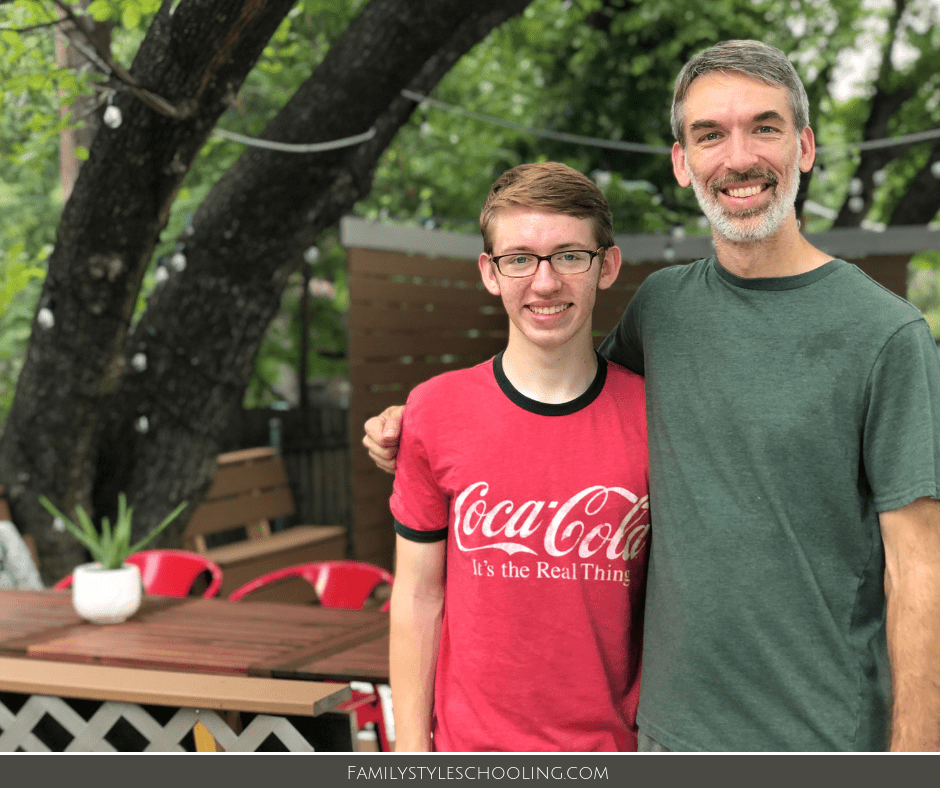 Taking school outside with a DIY backyard transformation turned out so much better than any of us could have ever imagined. I love how the new construction just enhances all of the antiques my family collected over the years. I look forward to enjoying this space with my kids for years to come. 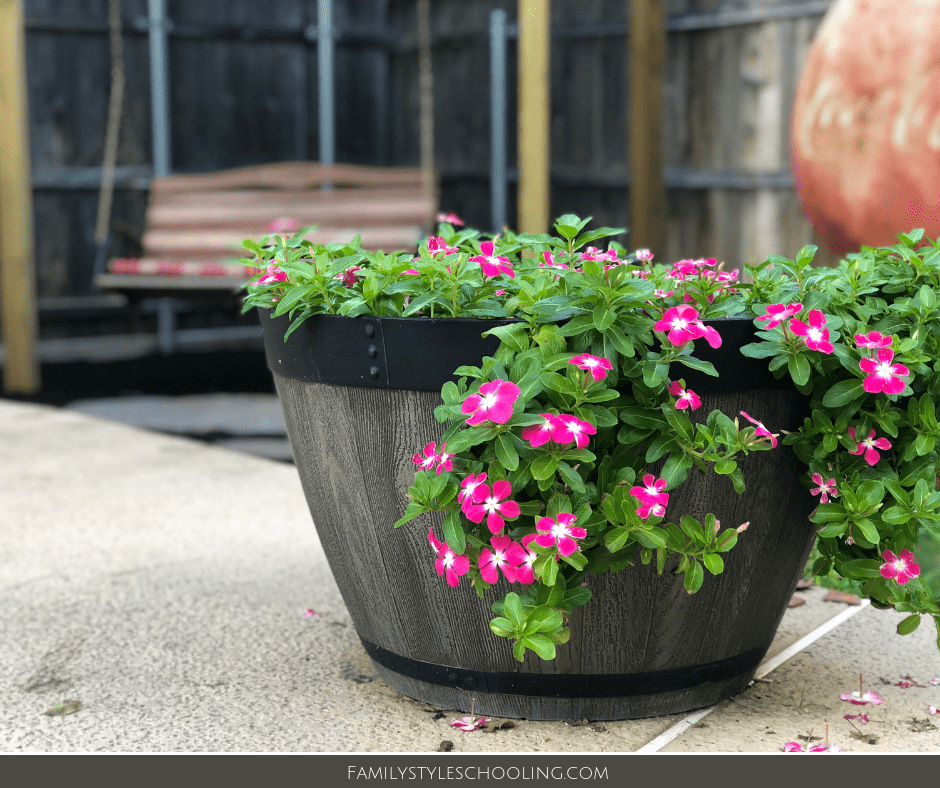